Our Future on Earth: Fab or Scary? 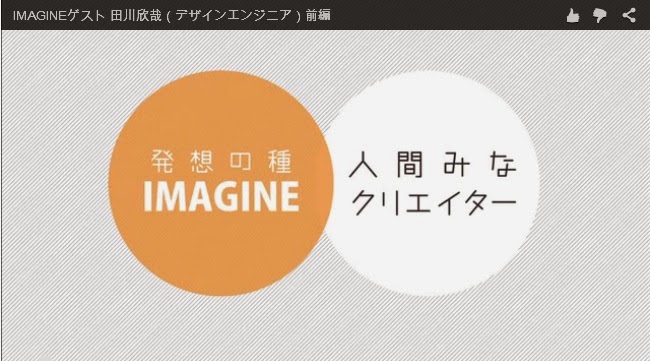 This week, our future is the talk of the town, from Tokyo to Lima.The message from the Japanese designers show, "The Fab Mind", is positive, it's a fab future: "fixing stuff, repairing the world" as Alice Rawsthorn, a British design critic wrote in the New York Times (see her article  here).

Repairing? Not quite, Takram, a Japanese design engineering firm, has produced a visualization of the impact of rising sea levels, heightened radiation and dwindling resources on Earth 100 years from now. More scary than fab!


As to the show in Lima, it's the Climate Change Conference organized by the United Nations,  called in UN-ese language: "the 20th session of the Conference of the Parties to the U.N. Framework Convention on Climate Change, or UNFCCC" - and here the future is definitely scary. The goal is to build the foundation of a new climate agreement to curb greenhouse gas emissions before it's too late — an agreement to be struck in Paris next December and take effect in 2020 (for more, read this Newsweek article here).

Will it happen with American climate deniers stomping around?

I have my doubts. The recent agreement between Obama and the Chinese President to curb their greenhouse gas emissions over the next five years has encouraged environmentalists. But this is without counting on a Republican-controlled Congress that is bound to block any progress towards global climate measures. In America, financial interests in keeping the way things are have become so politically strong, especially since the Supreme Court opened the door to the financing of political parties, that we cannot reasonably expect  any rational decision-making from the US. Yet America matters, it may only be 5 percent of the world population, but it accounts for 25 percent of total carbon dioxide production. It's still the world's top polluter and China comes second.

Yet, for years now, if you're surfing the Net for pictures of the future, you'll find plenty of evidence, and most of it is the stuff of nightmares. Here's a photo of today's coastline in Spain, snapped in 2009, and what, according to Greenpeace, it will look like 100 years from now as a result of rising sea levels: 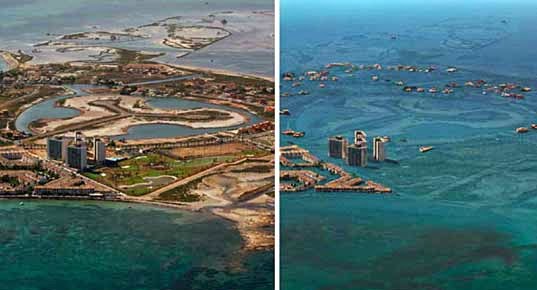 This was part of a photo album Greenpeace had put together, hoping to sensitize the Spanish to the effects of climate change (it worked, at least in Spain).

Unfortunately, and in spite of mounting evidence, lots and lots of people in America still don't believe it's happening. They claim there's no scientific proof even though top American scientists, from Princeton University to the Goddard Institute Space Studies, say otherwise. By now, the climate models run by hundreds of scientists prove beyond any possible doubt that climate change is with us and that it has become irreversible.

It's no longer a question of "will it happen" but of "what can we do to mitigate the effects".

For those still hesitant, I urge you to watch this Discovery Channel video about "what you should know about global warming". Done under the guidance of  American news anchor Tom Brokaw, one of 19 recipients of the 2014 Presidential Medal of Freedom, the highest civilian honor bestowed on "inspiring, bold Americans", I think it's one of the best films on climate change. Even though it dates back to 2012, it is still, alas, exceedingly topical:


It will take an hour out of your life to watch, but it really is time well-spent. I predict it will change your understanding of what is in store for mankind, particularly the latter part of the video...

You'll learn about "feedback loops" that can kickstart and accelerate change in unexpected ways. Carbon dioxide by itself cannot cause global warming, it's those feedback loops that make the difference - for example, with the increase in water drops in the air (clouds), heat will be trapped in the atmosphere and you could get a rise of between 4 and 6 degrees in this century. And of course, as spring comes earlier and summers last longer, whole species of plants and animals will disappear, polar bears and corals will be no more - yes, the 6th Extinction is upon us.

At the same time, a warmer climate will favor certain species like insects. Expect them to multiply and insect-borne diseases like malaria to rise (by the way, there are new strains of malaria that cannot be treated - at least for now). Humans of course won't be spared, drought will cause famines, wars will be fought on whatever productive land is left.

So are we doomed?

To figure this out, you need to take into account two other big trends besides climate change:
And of course, it's not just the digital revolution. NASA with its recent Orion test is giving us an exciting glimpse of the future.  The test was a big success,  a flight to Mars by 2040 - that's just 25 years from now! - is very much in the cards. Here is the key moment when the Delta IV rocket lifted Orion on December 5, 2014: 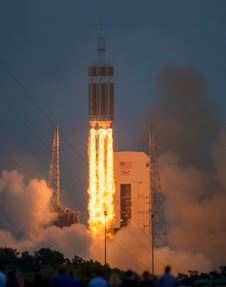 And here, some 4 hours later, is the recovery of Orion - the spacecraft withstood amazing temperatures (up to 4,000 degrees Farhenheit) and landed in the Pacific exactly where it was supposed to be, 600 miles from San Diego: 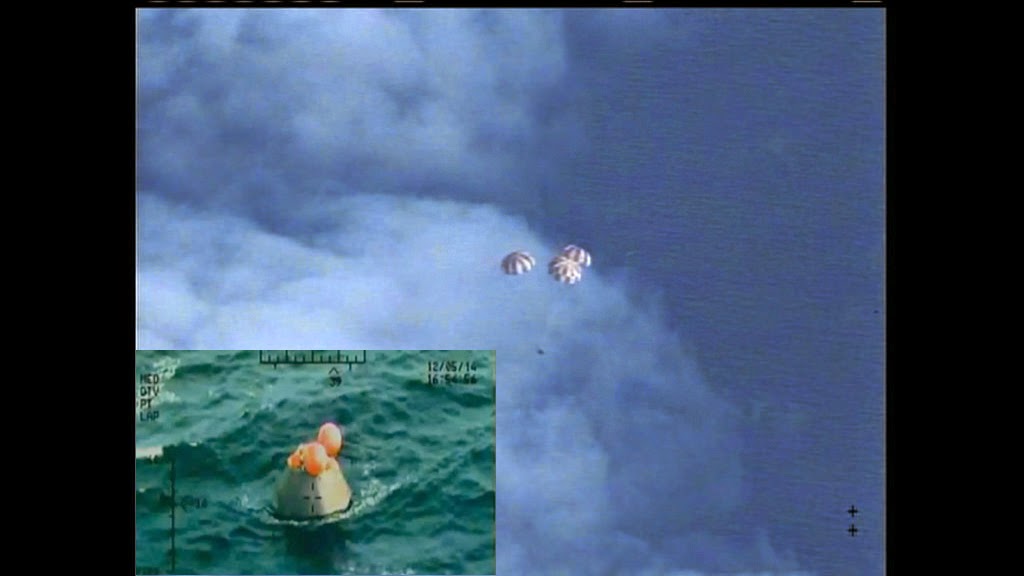 So the future is going to be highly technological, profoundly unequal and...very hot!

That's something that is a matter of concern to me, as a mother and grandmother.

In what kind of world will our grand-children and great-grand-children live? Since I also happen to be a fiction writer, I tried my best to imagine the future, when global warming has wrecked havoc to the fullest, when plants and animals are headed for extinction and whatever remains of mankind is trying to survive the best it can on the little good land left.

I figure all that won't happen tomorrow morning, nor will it happen all that fast. Give or take another 200 years before we have to face full extinction. At that point, global warming will no longer be a subject of debate, it will be a given. That is the setting of my novel Gateway to Forever - and in that sense, the book can be said to fit into climate fiction, or cli-fi, a word coined by Daniel Bloom, to define what is fast becoming a hot new genre in both books and films.

What will the world be like? You have to remember the two trends I mentioned above. There will obviouly be a handful of super wealthy individuals facing impoverished masses; the rich will enjoy all the benefits of science, the others won't. That means it will be a world divided not only between the rich and the poor, but the technologically advanced and the backward. The impoverished masses will live in medieval conditions, some worse off like cavemen, others slightly better like the middle classes today.  The rich, the One Percenters, will live in gated communities that will provide them with a perfect, pollution-free environment. They will enjoy the benefits of an Age Prevention Program that will keep them looking young till they drop dead at a ripe old age. They will take control of the only virgin land left on Earth, Antarctica, and they will be able to travel to other planets, even traveling faster than light as the technology to compress space and time becomes available.

In short, they can escape while the rest of us can't.

That makes of Gateway to Forever a very unusual science fiction book. Fans of sci-fi love to imagine a robotic future where the machines are king, but in my book, what matters are not the machines but the machine owners, the One Percenters. I've even had one reader comment that the future I depict in my book is not "futuristic" enough! But that's the whole point: the future will not be "futuristic" at all for the poor masses, only the rich elite will have the possibility to avoid extinction and take refuge in space. And that's what the book is about: how can mankind survive, and in particular, how can one very pretty girl called Alice escape when she wasn't born a One Percenter?

Gateway to Forever will be exceptionally available at the giveaway price of 99 cents from 9 to 12 December. Hurry, grab your copy here, and find out what happens to Alice...This is the portrait I made of her, fiery and defiant, staring at a dead world: 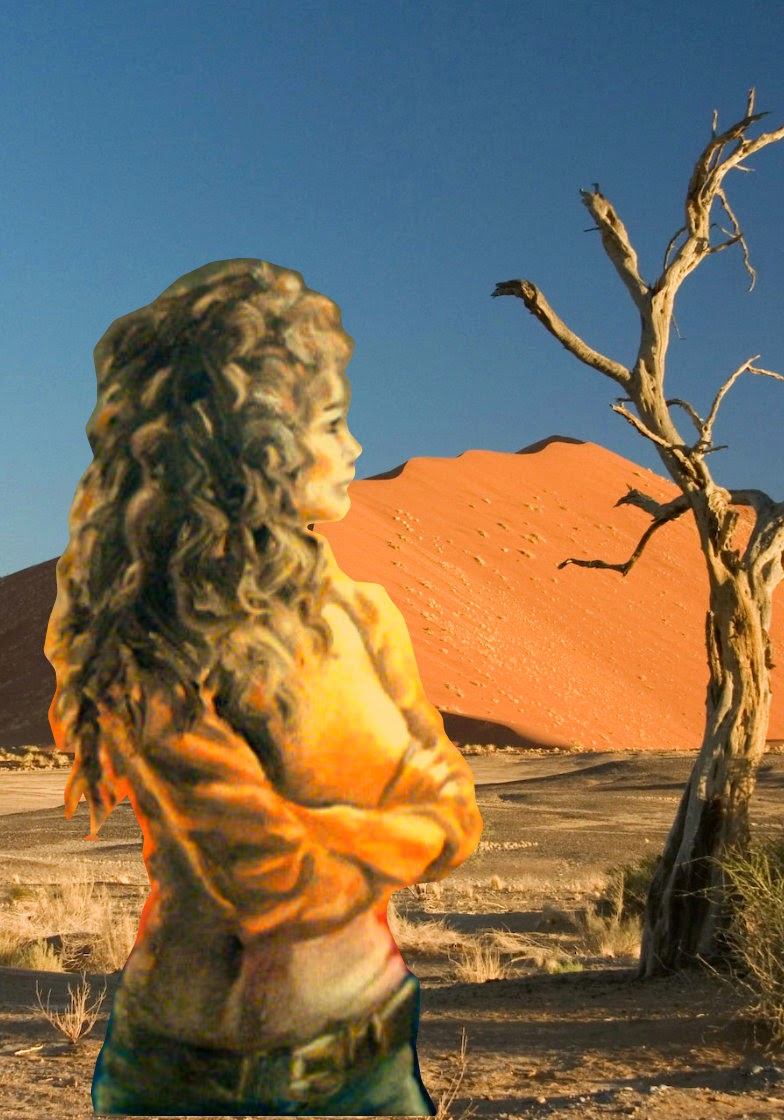 Yes, come and imagine the future with me! 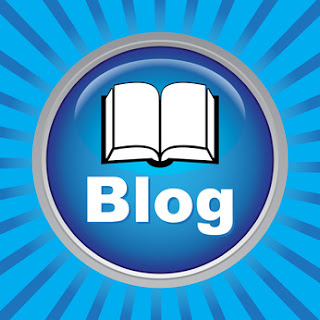 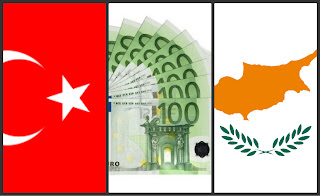